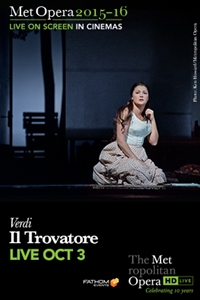 Celebrate the tenth anniversary of the Metropolitan Opera's Peabody and Emmy Award-winning series The Met: Live in HD. The broadcast of Verdi's Il Trovatore will be presented live on Saturday, October 3 in select cinemas nationwide.
Soprano Anna Netrebko's dramatic and vocal skills are on full display in her next new role at the Met-Leonora, the Verdi heroine who sacrifices her own life for the love of the gypsy troubadour. Tenor Yonghoon Lee sings the ill-fated Manrico, baritone Dmitri Hvorostovsky is his rival, and mezzo-soprano Dolora Zajick is the mysterious gypsy with the troubled past. Marco Armiliato conducts Sir David McVicar's Goya-inspired production.