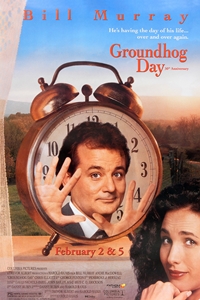 Snowed in during a trip to Punxsutawney, Pennsylvania, to cover the annual Groundhog Day festivities, television weatherman Phil Connors (Bill Murray) finds himself stuck in time, endlessly repeating February 2nd. His world is inhabited by the same people every day, but they don't know Groundhog Day is repeating itself. That gives him a certain advantage: He can find out what a woman is looking for in a man, and then the "next" day behave in exactly the right way to impress her. Luckily there is a woman closeby to practice on. She's Rita (Andie MacDowell), Phil's long-suffering producer, who has had to put up with his tantrums, demands and surliness. Gradually Phil is able to see the error of his ways and improve his behavior until, finally, a Groundhog Day dawns when she finally likes him.