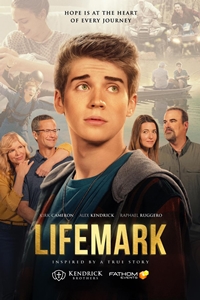 While he's always wrestled with the idea he was adopted at birth, David knows he is loved and cherished by his parents and grandparents. As he turns 18, he's excited and a bit nervous about what the future holds. But when Melissa, his birth mother, unexpectedly reaches out to him, David's world is turned upside down. Should he respond to her? What about his birth father? What are they like? And why did they choose not to raise him? Facing the reality of his adoption, David must choose to either meet with his birthmother or go on with his life as he's always known it. With the loving encouragement and support of his parents, and his best friend going along to capture on camera everything as it happens, David chooses to embark on a journey of discovery - and ultimately, forgiveness. From executive producers Kirk Cameron and the Kendrick Brothers - creators of War Room and Courageous - comes LIFEMARK, based on an incredible true story celebrating adoption, family, reconciliation, and love.