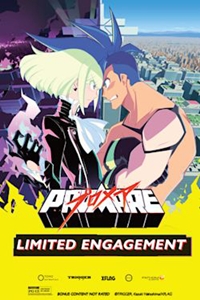 Fathom Events and GKIDS bring Promare back to the big screen for an exclusive limited engagement featuring Side: Galo and Side Lio shorts. The first feature film from the acclaimed Studio TRIGGER and director Hiroyuki Imaishi, Promare is an explosive showdown between Burning Rescue and the destructive Mad Burnish in an electrifying, explosively colorful action-adventure. Thirty years has passed since the appearance of Burnish, a race of flame-wielding mutant beings, who destroyed half of the world with fire. When a new group of aggressive mutants calling themselves "Mad Burnish" appears, the epic battle between Galo Thymos, a new member of the anti-Burnish rescue team "Burning Rescue," and Lio Fotia, the leader of "Mad Burnish" begins.